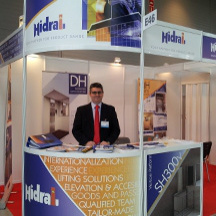 Euro-Lift, the International Lifts Exhibition held in Kielce (Poland), has consolidated its position as the leading platform to showcase the latest novelties in the lift industry in this part of Europe.

This year’s event was much bigger than last year’s, attracting over 100 businesses from 18 countries. Sixty per cent of the exhibitors were foreign firms attracted by the rapidly expanding Polish market.

Hidral was the only exclusively Spanish company to participate in the event. As a company that has already forged a solid position on the Polish market, the goals behind attending the exhibition were to support the company's client network, already established in the main geographical areas of the country, and to find a distributor to gain access to smaller customers. The company also received visits from clients from Russia and the Baltic area.

Over the course of the event, Hidral presented this market with new products including the new range of QH Goods Lifts, the EHMix Goods Lift with Attendant (which features two modes of operation:  for goods alone, and for goods accompanied by an operator) and the ECH Car Lift (for the vertical transfer of vehicles with their occupants, in accordance with the Machinery Directive). The company also promoted the Passenger Lifting Platform DH (Home Lift)

Once again, Hidral has demonstrated its commitment to international expansion by taking part in events in countries where it has set growth objectives, such as is the case with Poland.