Hidral took part in the sixth edition of the international lift exhibition, LIFT EXPO RUSSIA, which was held in Moscow on 6, 7 and 8 June. 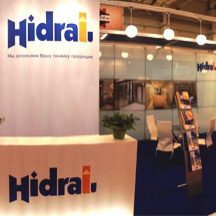 Lift Expo Russia is a meeting place for manufacturers, suppliers, distributors and installers from the lifting industry, and represents a great opportunity to interact, find out about industry trends and innovations and negotiate commercial agreements.
This edition played host to many manufacturers from the Russian market and the countries of the former USSR as exhibitors, as well as international companies from Germany, China, Spain, Italy, Greece and South Korea.
As has become usual, Hidral also took part as an exhibitor and saw a significant increase in the number of visitors to its stand, compared to the previous edition, underlining the recognition that the HIDRAL brand has attained among companies in the sector.
There are several factors that have led to Hidral today enjoying a good position in the Russian lifting sector: the overcoming of the usual difficulties of operating in a foreign country (language, customs formalities, certification of products according to the country's rules and directives, etc.), its over twelve years' experience in the Russian market... And, without a doubt, the creation of the Russian company, OOO Hidral Rus, in March 2012, by Hidral. It currently operates as a commercial office: this office directly handles orders from this market, ensuring fluid communication with clients, more personalised support and greater speed in the preparation of quotations, order management and after-sales service. And with the aim of having production lines for established products, soon OOO Hidral Rus will also have its own industrial facilities.
The Hidral products which are already well established in the Russian market are the EH goods only lifts and QH big lifts, which are already known generically as "Hidral-type" goods lifts. Thus, the objective at Lift Expo Russia has been to promote the Home Lift DH and the accessibility line, among which the SH Delta stair lifts have been well received.